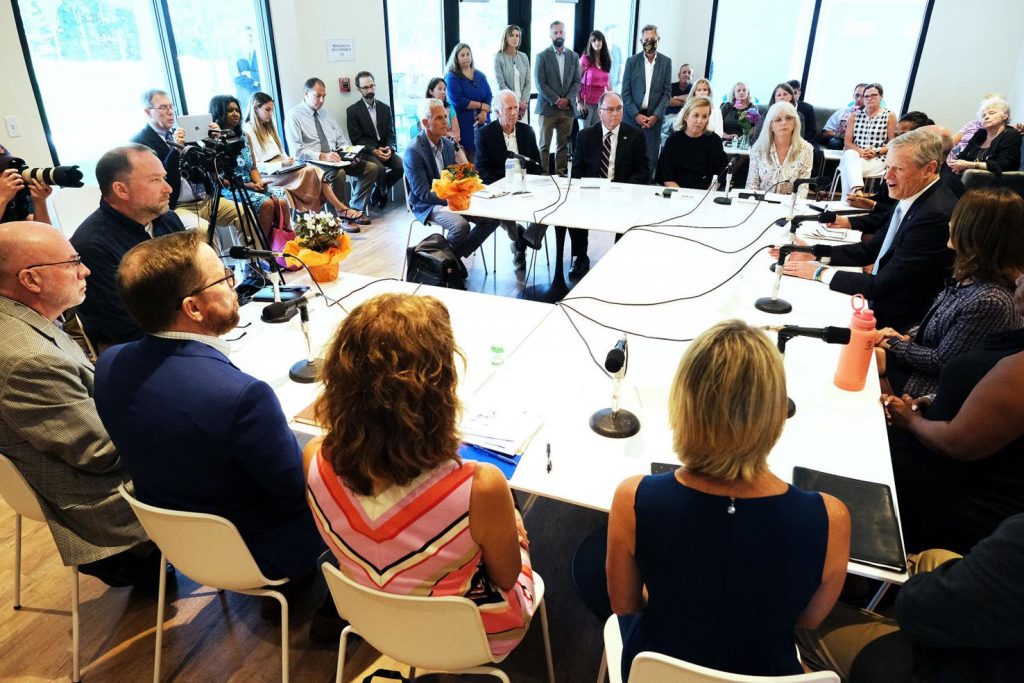 Among the participants were Lieutenant Governor Karyn Polito, Secretary Mike Kennealy, State Senator Susan Moran, Eric T. Turkington Falmouth Housing Corp Board Chair, Phillipe Jordi of the Island Housing Trust and Tara Mizrahi, Executive Vice President of Affirmative Investments Inc. The meeting was held in the community center at Little Pond Place, where Gov. Baker was given a tour of one of the residential units that were completed last summer. Little Pond Place is a 40-unit family development near the central business district in Falmouth.

Governor Baker was very open to listening and understanding the importance of creating affordable housing in the Cape. Mr. Turkington proposed the latest plan to create more housing opportunities in Falmouth. The latest plan of zoning modifications, such as the mixed-use overlay district, which would foster the creation of diverse housing opportunities as well as stimulate the local economy. He explained how the plan would allow for 20 units per acre by right—25 percent of which will be affordable housing—and stressed the importance of expanding the housing market on Cape Cod, which is currently 92 percent single-family homes. Ms. Mizrahi discussed some of the unique challenges of developing on the Cape and Islands focusing on the very high costs of construction and infrastructure.

To read more about the roundtable discussion/ comments from Governor Baker, and other participants click here.

See below an updated look from Berklee Building Company during week 30 of construction. 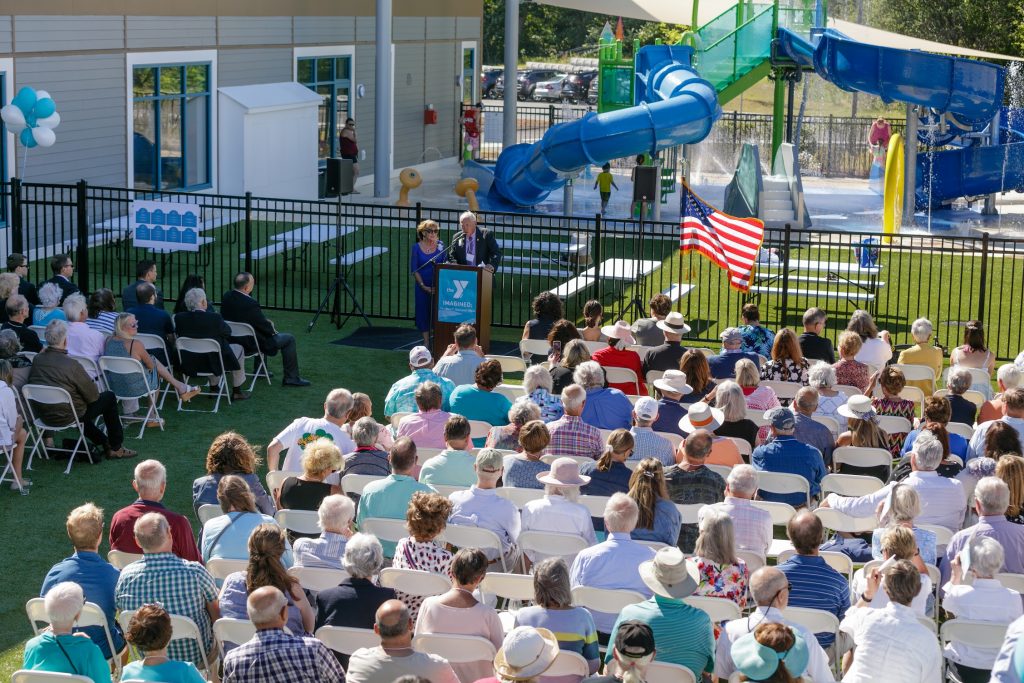 Scene from dedication ceremony for the Glen T. MacLeod YMCA for Cape Ann

Affirmative Investments was excited to attend the Ribbon cutting ceremony for the New YMCA at the Gloucester Crossing. AI secured $15MM in Allocation, with the projects total development cost at $25MM.

The new building will enable the Y to double its capacity from its old Middle Street home, provide about 300 parking spaces, and bring in natural light with big windows that look out into the green spaces surrounding Gloucester Crossing.

To read more about the project and all the great feedback received from local officials and Lieutenant Governor Karyn Polito click here. 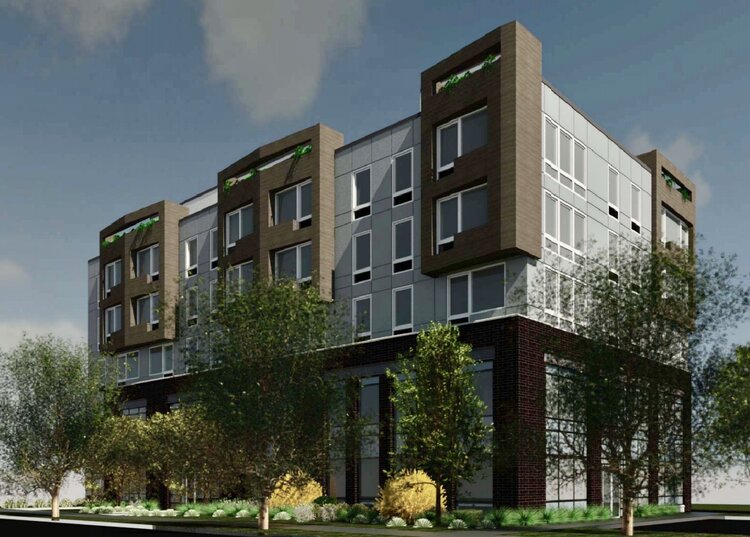 Affirmative Investments, Inc. secured and closed on $2.93MM of subordinate debt financing from City First Enterprises and BlueHub Capital for DC SAFE’s “Safe Space” project. DC SAFE is Washington DC’s only 24/7 domestic violence organization, providing housing placement, advocacy, counseling services, and referrals to domestic violence survivors in the District. The project will provide 30 apartment-style units and allow the organization to double the number of women and their families they place into emergency housing. The building will also provide administrative office space for DC SAFE and space for complementary non-profit organizations such as the DC Forensic Nurse Examiners. Other lenders included United Bank, City First Bank, and Founders Bank. To learn more about DC SAFE and its project, visit: DC SAFE.

Affirmative Investments, Inc. assisted the Huntington Theatre Company in securing debt and tax credit financing for the renovation of its historic Huntington Avenue Theatre. Once completed, the renovation will create a 750-seat theater that will provide additional cultural performances to the public, expand its youth educational programming, grow its apprenticeship and workforce development programs; and increase its Huntington Community Membership Initiative. Affirmative secured $7 million of NMTC Allocation and a $9MM Federal Historic Tax Credit Investment from the National Trust Community Investment Corporation and East West Bank. Affirmative also worked in partnership with Zion’s Bank to structure a $44,460,000 loan from Century Bank.

“The Huntington Theatre has been home to so many extraordinary productions over the past four decades,” says Managing Director Michael Maso. “We now have the opportunity to restore this gem of a theatre to its former architectural glory, while also enhancing it with new, modern amenities to serve our artists, our audiences, and our community. And after a year of the theatre being dark, it is thrilling to announce that there is once again energy and activity in the building, as we plan for an exciting future.”

This past year AI and our partner the Falmouth Housing Corporation have been as busy as we ever have creating affordable housing in Falmouth. We completed Little Pond Place & Gifford Workforce Phase I, and began construction on Phase II, 60 affordable apartments in all.

We completed construction and fully leased up Little Pond Place, a project we co-developed and co-own with the Falmouth Housing Corporation. This 40-apartment development for families includes a low-rise apartment building, two townhouse buildings, a community building and play area. Little Pond Place is located near downtown Falmouth and next to conservation land and Little Pond.

Affirmative served as the development consultant for FHC on Gifford Workforce Phase I. This project, funded by the Community Scale Housing Initiative, created ten units of workforce housing, a serious need for seasonal workers and others on the Cape. Falmouth Housing Corporation donated the land for the project, which is adjacent to the Falmouth Service Center and surrounded by other FHC properties and conservation land.

Gifford Workforce Phase II broke ground in February. The same development team will be building an additional 10 units of workforce housing, which will be completed and leased up in the Winter 2022.

Affirmative is excited to be a financing partner on the Nubian Ascends Team.

Kai Grant and her husband, Chris Grant are working to purchase the building in partnership with Madison Park, a 55-year-old community development corporation that has helped build affordable housing in the city and restore Hibernian Hall. Madison Park will provide technical assistance, helping to usher the Grants through the purchase.

The Grants’ acquisition of the building is still being finalized, but should it go through, it will be another promising piece in Nubian Square’s redevelopment, said Richard Taylor, a developer who has partnered with the Grants on plans for the Nubian Ascends project, which will be built on the Blair Lot parcel in the square. The 329,000-square-foot project would bring market-rate office space, a marketplace, and a cultural hall with artists’ work spaces to the neighborhood. It was approved by the Boston Planning & Development Agency in December.

37 Union Street was one of the projects that were awarded by Housing and Economic Development Secretary Mike Kennealy and Housing and Community Development Undersecretary Jennifer Maddox, who joined local leaders for a virtual celebration of the Commonwealth’s most recent affordable housing awards. Awards supporting 12 projects in 8 communities will bring 572 new housing units to Massachusetts, including 507 affordable units, with 108 reserved for extremely low-income households. These awards will provide a combination of state and federal housing tax credits, state and federal rental vouchers, and direct funds to support new housing development.

Click here to read more on other awarded projects in Massachusetts.

To view this press release in another language, click here. 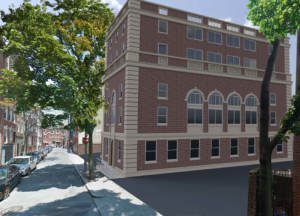 MassDevelopment has issued a $6.4 million tax-exempt bond on behalf of 41 N. Margin Senior Apartments, LLC, an affiliate of East Boston Community Development Corporation (EBCDC) and Affirmative Investments, Inc., which is using bond proceeds to receive a 99-year lease from Ausonia Home Association for a portion of its property at 41 N. Margin Street in Boston’s North End. EBCDC and Affirmative Investments are also using bond proceeds to convert the property, which has been vacant for two years and was previously the headquarters for the Ausonia Council 1513, Knights of Columbus, into the Knights of Columbus Apartments that will feature 23 one-bedroom units of affordable senior housing to be rented to households earning no more than 60% of the area median income. The project includes renovating the building, adding two floors where the housing units will be located, and constructing a 1,600-square-foot addition that will serve as the new quarters for Ausonia Council 1513, Knights of Columbus. Eastern Bank purchased the bond.

“MassDevelopment is proud to help bring affordable senior housing to one of the most historic neighborhoods in Boston, through East Boston CDC and Affirmative Investments, Inc.,” said MassDevelopment President and CEO Dan Rivera. “The Knights of Columbus headquarters played such an important role in the life of the neighborhood so we are honored and excited to see the property continue its legacy as a safe and affordable home for many area seniors.”

“This project will help to create much needed affordable senior housing in the heart of Boston’s North End,” said Pamela Feingold, Senior Vice President and Head of Community Development Lending at Eastern Bank. “Eastern Bank is proud to provide the construction and permanent financing for this project, and we thank MassDevelopment and the entire group of funders for expanding secure and stable housing to the elderly.”

In addition to the tax-exempt bonds, MassDevelopment assisted the Massachusetts Department of Housing and Community Development with the approval of federal low-income housing tax credits, which will provide approximately $4.7 million in equity for the project.

“The members of Ausonia Council 1513, Knights of Columbus, are excited to work with East Boston CDC, Affirmative Investments, and state and city governments to provide 23 affordable, elderly apartments to give residents an opportunity to remain in the neighborhood,” said John Pagliuca, Grand Knight of Ausonia Council 1513, Knights of Columbus. “We believe that using Ausonia Home Association’s property to address the shortage of affordable housing in the North End fulfills our charitable mission to improve the quality of life for people in need.”

“EBCDC, AI, the Knights of Columbus, MassDevelopment and the City of Boston have, once again, formed an exciting partnership that will result in affordable housing that will create an opportunity for those senior citizens who have long ties to the North End to remain in the community,” said East Boston Community Development Corporation President Albert Caldarelli.

Affirmative Investments, Inc. partners with mission-driven organizations by contributing its real estate finance and development expertise to expand housing opportunities and deliver critical services in low-income communities. Since its founding in 1984, Affirmative Investments has facilitated the financing and development of $921 million of affordable housing nationwide, representing more than 6,200 units and 81 New Markets Tax Credit deals totaling 4.5 million square feet of space with development costs of $2 billion.

“We are so pleased to move forward with this exciting project for the North End community and cannot thank the Knights of Columbus enough for their generosity and vision,” said Affirmative Investments President David Ennis. “And MassDevelopment is a great and supportive partner.”

MassDevelopment, the state’s finance and development agency, works with businesses, nonprofits, banks, and communities to stimulate economic growth across the Commonwealth. During FY2020, MassDevelopment financed or managed 341 projects generating investment of more than $2.69 billion in the Massachusetts economy. These projects are estimated to create or support 10,871 jobs and build or preserve 1,787 housing units. 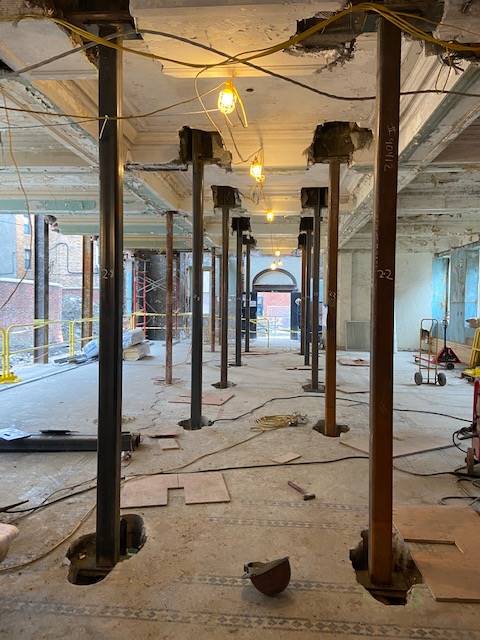